Some describe William Stoner, the protagonist of Stoner, as a failure. That he is a failure as an academic, as a teacher, as husband – as a man. I could not disagree more.

Born on a farm into a non-intellectual home, he is sent to university to study agriculture, but switches to English literature – even though he at first is completely at loss on the subject. He is thus saved from the mind numbing farm life, to which he feels his parents have become victims. Made eloquently clear by Willimas, as Stoner makes a visit to the farm, after the death of his parents:

“Nothing had changed. Their lives had been expended in cheerless labor, their wills broken, their intelligence numbed. Now they were in the earth to which they had given their lives; and slowly, year by year, the earth would take them.”

One could argue that, from an intellectual standpoint, the earth had consumed his parents many years prior to their deaths.

In this, Stoner is a success. It is remarkable to see his intellectual awakening; to be part of this process, to witness his progress.

Awkward socially, Stoner does not make many friends or lovers in his lifetime – but being an introverted personality, he does not need much company for his happiness. His marriage, of course, is a failure, but little because of Stoner. His wife, Edith, is a clearly troubled woman, with a never ending self pity, and vicious, vengeful attitude. Their relationship is never warm, and their sexlife is, in the small sense they have one, beyond awkward. Periodically Edith makes Stoner’s life a living hell, while in other periods they simply live parallel lives, accepting but avoiding each other.

I would say that Stoner meets and marries Edith before he is emotionally awakened. That what he at first interprets as love for Edith, is in fact mere infatuation and intrigue. By their failed cold marriage he feels cheated out of a proper, passionate family life, and she feels cheated out of the social status and popularity she imagines she deserves and could’ve had, had she not been impeded by Stoner. 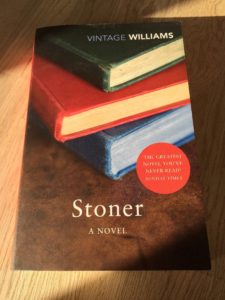 Stoner does however find love, outside of wedlock, if only for a brief time in his life. Though he naturally would’ve wanted his love to be everlasting, it has to end, because of various circumstances. Despite this, he feels content with the fact that he had the chance to experience true love and passion – something not granted everyone, and something he had lost hope in ever finding.

A man of integrity, Stoner’s work suffers because of a feud with a colleague, who rises in ranks and makes it his mission to sabotage Stoner. Assigning Stoner classes and assignments he is clearly overqualified for, making sure to rid him of the academic satisfaction his work has previously granted him.

Stoner, in a way, reverts to the mindset of the farm boy he once was, shutting down emotionally and intellectually to endure this hardship. Accepting it as his fate, rather than to fight it. At least until he has had enough, at a point when he no longer feels he has anything to lose by challenging his organisational superiors.

In this, again, Stoner is a success. He is the only character in the book not in the slightest driven by status, prestige or titles. He is driven by the sole pleasure he finds in his work, in teaching, and in literature.

The only one I feel Stoner fails is his daughter. She becomes very emotionally scarred because of Edith’s whims, delusions and self interests. Stoner understands that the child will be hurt and inhibited by his wife’s controlling, demanding, and demeaning behaviour. Something his daughter will pay dearly for in adulthood. For this, Stoner should feel more guilt than he does.

While perhaps not a happy man, Stoner is content with how his life panned out. That he got to experience and fulfil more dreams than he could’ve hoped for, being born into a poor farmer’s family. He made his class journey. He made himself. The way he carried his intellect and competence in quiet dignity is admirable.

In William Stoner I see more success than failure.