Sapiens – A Brief History of Humankind has a couple of major flaws, it’s title being one of them. Rather than a brief history, it’s more of Yuval Noah Harari’s not so brief musings on the human condition. I can see why some people feel cheated or disappointed after 80-90 pages, because by then the books second flaw become apparent.

Harari tend to go into lengthy tirades to make points about our social, economic, and political constructs. I am sure his wordy expositions are meant to be inclusive and make sure the reader understands his viewpoint. The result, however, is that he loses the reader along the way. Either because the reader thinks “Get to the point!” or “This is not ‘a brief history’, it’s a tedious rant!”

This is frustrating, because his points are often interesting and sometimes provocative. But I can’t help but feeling Harari could benefit from a more harsh editing of his text.

With all that said, I don’t mean to sound overly negative. Because all in all, this is a good book. Harari possesses both detailed knowledge and the ability to make Big Picture connections from it. He is persuasive – if a bit wordy – in making good arguments for the conclusions. You learn from this book and it requires the readers engagement from time to time. So I can see some might get disappointed if light entertainment is what you’re after.

Harari does not shy away from letting his own opinions shine through. I was not at all surprised to learn that he’s a vegan after reading his detailed accounts of the cruelty exerted on domesticated animals even at the early stages of human farming society. It’s not a bad thing that the author’s worldview shines through from time to time. It gives us a glimpse of Harari’s dry academic humour to lighten up the sometimes dense flow of information.

I skipped some parts that didn’t tickle my interest and that’s fine, I wouldn’t slate the book on that account, but naturally that lowers my overall impression.

It’s definitely worth a read.

The English language has some great words for describing confusion. Words that in themselves, simply by their sound and spelling, have the power to capture and even cause the state that they describe.

I don’t know the term for it, but just like an onomatopoeic word mimics the sound of the sound for which it is the word – BANG! – discombobulated leaves your brain with a distinct sense of its meaning.

Discombobulated has brilliant synonyms in befuddled and flummoxed. Both words, but flummoxed in particular, captures the sensation of a mind flapping around, trying to grasp the reality that’s just been thrust upon it.

Discombobulation between people can often cause a kerfuffle. An almost onomatopoeic synonym for a kerfuffle is a hurly-burly. I mean, that pretty much captures the sound of a group of angry men shoving each other about, making noises fit for the Swedish Chef, right before someone excretes a loud “KERFUFFLE!” and delivers a punch to the face.

An especially serious hurly-burly can sometimes conclude in a defenestration – the act of throwing a person out of a window.

This word has a prominent place in history due to the Defenestrations of Prague. It seems that the Czechs have a penchant for removing people from power by hurling them from tower apertures. A right kerfuffle!

I imagine they felt quite flummoxed. Flummoxed and indeed utterly discombobulated.

Paul Auster’s “4 3 2 1” starts off by defining the preamble of it’s protagonist, Archie Ferguson. Presenting his parents, how they met, and the very beginnings of Ferguson’s existence. Then it forks off into four separate trajectories, based on different turn of events affecting life’s direction and the young man’s perception of it.

The four stories of Ferguson is an exploration of predisposition. The inclinations we have based on heritage. Directions we take through experiences that push us to choose and develop certain talents over others, and how the same talent can be expressed in many ways.

On the surface this is just another book obsessing over writing and writers, as Ferguson is drawn to literature and writing in every incarnation. That would however be a superficial conclusion. This is a story of seized opportunity and of untapped potential. The randomness of life and death. Of success and happiness and how the two might not be coherent or at all related.

It explores different types of love and relationships. Love of parents, love of soulmates. Those who we are instinctively and immediately drawn to and those we might come to love as a result of friendship or by prolonged exposure to their person. Sexual awakening and sexual specifics and sex in general.

If the book had truly obsessed over writers, Ferguson would probably have been presented as a much more interesting character – something which he is not. Ferguson is the centre of the story, but is in himself only a small part of the book as a whole. 4 3 2 1 demands attention and reflection. You need to jam the whole thing into your head, then let your intuition mull it over for a while to fully grasp it’s depths and multitudes.

Because Auster is an amazing writer, able to sneakily plant life’s complexity into the readers subconscious, but he is also a massive show off. He really wants everyone to know how good and clever he is, with sometimes tedious results. I can’t help thinking this book could’ve been written using fewer words – maybe even by dropping an entire life arch – because at almost 1100 packed pages this book is definitely an undertaking. If nothing else, surely the incessant name dropping of authors, poets, writers, and artists that go on for full pages could’ve been shorter?

But, with that said, I am not Paul Auster and thus not qualified to tell Paul Auster how Paul Auster should write. The book was not as rewarding a read as I’d hoped, but nonetheless an achievement for the author. Few could pull off the plurality and cheer volume of this venture. 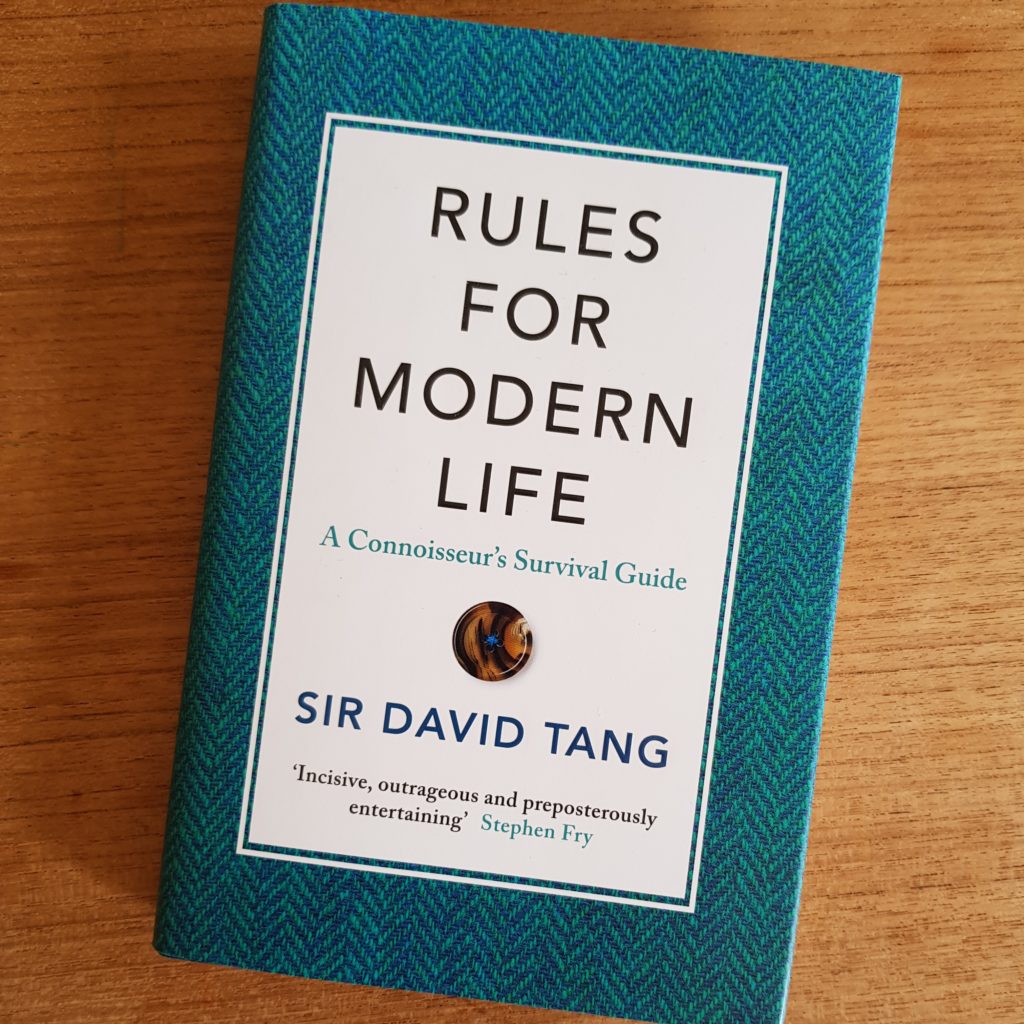 Rules for Modern Life is comprised of questions, sent by readers to Sir David Tang’s column in Financial Times. The subjects range from fashion to relationships to good conduct in various situations and the authors opinion on a number of issues.

At its best, this book is funny, witty, and entertaining. Memorable even. Sadly, most of it is tedious, snobby, and lazy, often avoiding the subjects with self-important drivel, making the author come off as obnoxious and contrived rather than urbane and deadpan – which I assume was the aim.

I was disappointed as it came recommended in more than one list of “must read” books. Overrated and insipid.

[For some reason I wrote this in English, though I read the book in Swedish.]

We follow the life of Arvid Stjärnblom, a young, intelligent young man of lower middle-class origin. Not an educated man, but intellectual nonetheless. He becomes a journalist after passing on the opportunity to study to become a teacher.

He falls in love with a young girl, Lydia Stille, the daughter of a once famed Swedish painter. But their love can never quite be. Arvid feels he cannot offer marriage, as he’s not in a financial position to provide a comfortable life for her. And though the two lust for each other, he does not want to persuade her into lewdness, because “should he succeed he’d lose respect for her, and should he fail he’d lose respect for himself.” Ultimately Lydia marries an older, well-to-do historian and author, and moves from Stockholm to live with her husband in the countryside.

Arvid often uses his and Lydia’s unrealised love as a springboard for philosophies on moral and duty. However, he does not always live by high moral principles, as he has flings and love interests, and fathers an illegitimate child. (A child that he acknowledges and “does right by” by securing adoption into a good home and by paying support.)

He becomes secretly engaged to Dagmar Randel, the daughter of a semi-successful businessman. After a while she tricks him into outing their involvement and he finds himself in an involuntary marriage. Though he’d rather remain “free”, the marriage is not without happiness and mutual respect.

With age, perhaps corrupted by his peers, who seemingly more often than not keep mistresses, Arvid becomes less occupied by moral qualms, and feels less obliged to his wife. When Lydia gets in touch with him, after a decade of no contact, they promptly engage in a love affair.

Set in Stockholm during the late 19th and early 20th century, this book appeals to those fascinated by life during this period. It gives us an insight into the, many times unhappy lives of the middle class. Where marriage is more of a financial agreement than the result of passion, and family life becomes a prison.

There are parallels between Hjalmar Söderberg’s own life and that of Arvid Stjärnblom. It’s no secret that Lydia Stille is based on Maria von Platen, who for a time was Söderberg’s mistress. That said, Söderberg tries to deny the links between the story and his own past by having the character Rissler, an author and playwright, explain how everything in his salacious writing is made up, and not self experienced. He goes on to blame August Strindberg for leading the public to think everything an author puts on paper is autobiographical.

The book still feels relevant a hundred years after it was written. The prose is beautifully crafted. Flowing easy, though dated in some expressions and the formality with which the characters converse.

On its release in 1912, it must have been seen as quite risqué, especially Lydia Stille. After divorcing her husband she lives a “free life” mainly reserved for the male sex back then. As the story unfolds, she keeps several lovers, and vows to never marry again.

In the end Arvid’s life falls apart. Dagmar finds out about his infidelity, but refuses to divorce, and he cannot accept that Lydia is involved with other men, ending their relationship.

At the same time, I feel that Söderberg argues against this fatalist notion, between the lines.

Arvid’s life is largely formed by his own inability to choose and decide. He does not choose to study to become a teacher, he sticks with journalism, a job he gets largely by coincidence.

He chooses not to pursue the love of Lydia, under the pretence that he cannot give her the life she deserves, though he simply does not want to settle just yet. He does not want to marry Dagmar, because he does not want to get stuck with her, as he seems to think he can do better. Even when offered a second chance with Lydia, he finds reasons not to marry her. And though he eventually feels great remorse in doing Dagmar wrong, he never acts on these feelings. Never tries to do right until his hand is forced, by which time it is too late.

Perhaps Söderberg is telling us that one can’t let haphazardness run life, and then thinks of it as fate. That a man is not judged and rewarded by his thoughts and philosophies alone, but by his actions and decisions.

It’s tempting to view Arvid as the victim of circumstance, while in fact he’s a victim of his own cowardice and fear of commitment.