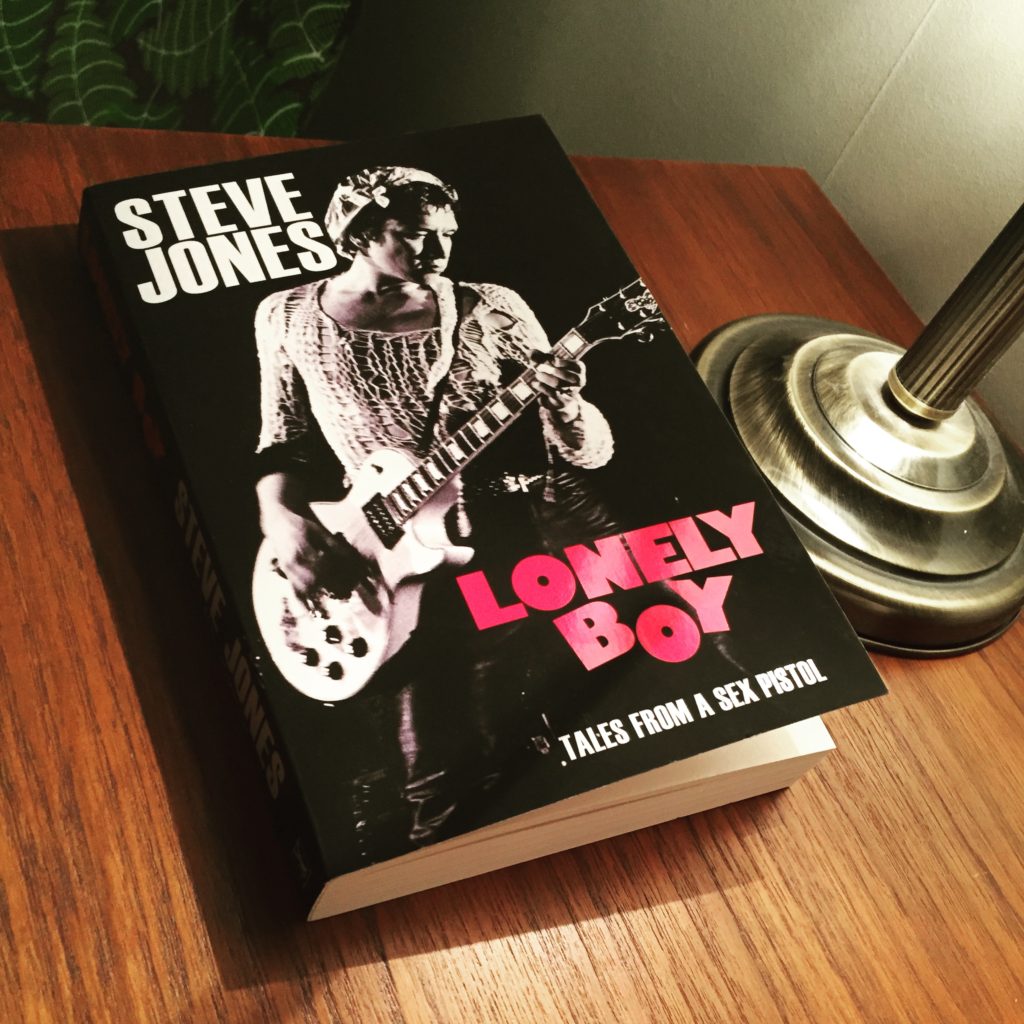 One – the number of paragraphs before Steve Jones calls someone a c*nt in his autobiography Lonely Boy. I don’t think I expected it any other way.

I’ve always thought that cockney crudeness entertaining. No banter is quite like cockney banter, and I find myself reading the words in Steve Jones voice in my head. Jones seems to have retained his English working-class vocabulary despite living in the US of A for quite some time now. I don’t know why, but I find that strangely gratifying.

With Johnny Rotten being the loudest and Glen Matlock perhaps being the reasonable one in the band, it’s easy to think they also were the brains. But I realise that’s a deception, especially in the case of Johnny Rotten, whose eloquence can’t be denied, but overall he’s more ego than anything else – even a raving drunk at times. Paul Cook and Steve Jones were very much the backbone, without whom it would all have been quite a different band.

And of course, nothing would’ve happened were it not for Malcolm McLaren, despite what Rotten might claim.

Lonely Boy is very honest and to the point. The book is well written, worded in the same vein in which Jones speaks. Being a dyslexic, he left the actual writing to a ghostwriter, which means the text is probably based on extensive interviews with the subject. Jones is the first to admit his memory is a bit dodgy after being addicted to every debauchery and ill behaviour known to man. So there’s been additional interviews with friends and family to fill in the gaps.

Jones tells about his lonely upbringing (hence the title), neglected by his mother, abused by his stepfather, estranged from much of his relatives and biological father. He tells of how sexual and psychological abuse, and an early inclination for heavy drinking and kleptomania, made their mark on his everyday life. It might not sound like much fun, but the stories revolving Jones stealing stuff from celebrities is quite entertaining. Especially the one involving the Rolling Stones coat.

He also sets a few records straight regarding his views the punk ethos.

Like how he never thought making money was something atrocious, or that record labels shouldn’t capitalise on their investments – i.e. on record contracts.

How D.I.Y. doesn’t mean things have to be sloppy or botched through laziness or incompetence. How it’s all fine and dandy to get drunk and stoned, but do your job and do it properly.

How the mindless violence of some punks (Sid Vicious included) made him distance himself from the whole punk culture.

He candidly and humorously recounts the downfall of the Pistols, sometimes with a little resentment but without bitterness. This makes Jones version of the story more compelling and believable than what Johnny Rotten has to say, and most certainly more believable than anything that ever came out of Malcolm McLaren!

An interesting read for anyone who likes biographies, but some basic knowledge of what happened in the London music scene in the 70s definitely adds extra flavour.